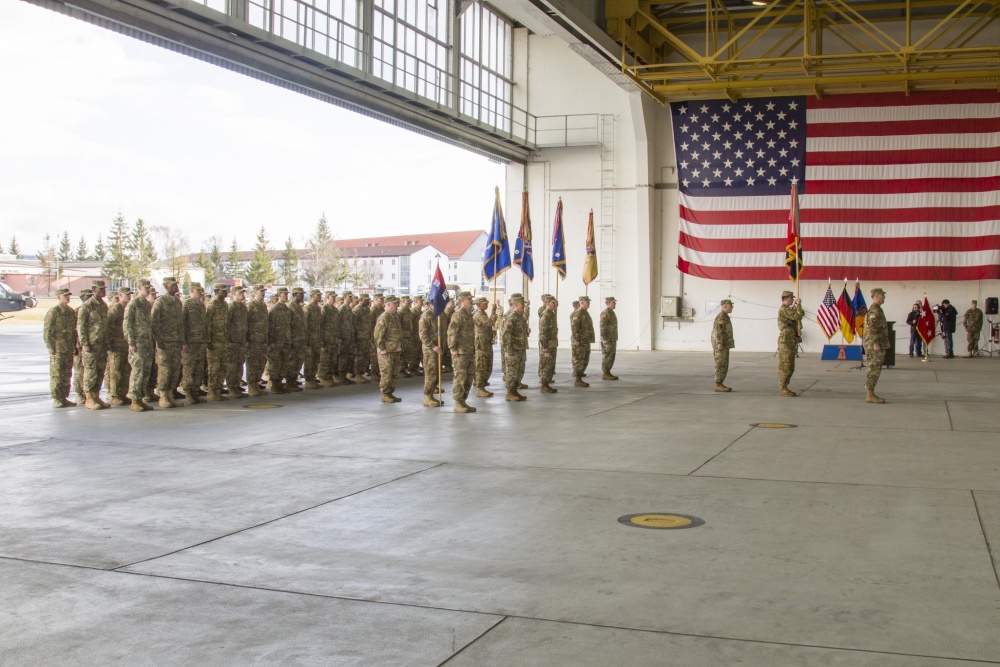 A formation of 10th Combat Aviation Brigade Soldiers stands will it’s brigade’s and each battalions’ colors uncased during a Hand Over/Take Over ceremony in Illesheim, Germany, on March 9. The 10th Combat Aviation Brigade is the first rotational aviation brigade assigned to Atlantic Resolve, a NATO operation designed to increase interoperability among allies, demonstrate the U.S.’s commitment to its partners, and deter foreign aggression.

The brigade will support U.S. Army Europe’s Operation Atlantic Resolve, with units in numerous NATO partner countries, providing opportunities to train alongside allies and demonstrating America’s commitment to peace and stability in the region.

“If you don’t have aviation, you’re not capable,” said Lt. Gen. Ben Hodges, Commanding General U.S. Army Europe. “The fact that the United States Army is spending the amount of money required to bring an entire aviation brigade back to Europe, with all of its equipment, at the highest level of readiness, and do this for nine months, then bring another one in behind it, that shows commitment, that demonstrates will, and that gives us the capability to provide deterrence. Having a strong, capable force and being very clear and transparent about it is the best way to make sure that we never have to fight.”

This will be the first brigade-sized rotational aviation unit to support Operation Atlantic Resolve. The 10th Combat Aviation Brigade is joined on this rotational deployment by 400 Soldiers and 25 aircraft from 1st Battalion, 501st Aviation Regiment, 1st Armored Division, based out of Fort Bliss, Texas.

The majority of helicopters and personnel will be stationed in Germany with a forward presence in Latvia, Romania and Poland.

The ceremony marked the last main body and equipment’s arrival in Europe, but training with partner nations and other U.S. Army assets in Europe has already begun. More training events are scheduled throughout Europe during the nine-month rotation. With terrain and weather that is in many ways similar to Fort Drum, the vast amount of training the Soldiers have received at home is credited with the success they expect to find overseas.

“This does break us into smaller teams, but it really allows us to highlight our greatest deterrent effect,” said Col. Clair A. Gill, 10th Combat Aviation Brigade commander. “We have leaders at very junior levels who are very capable of executing intent and making the right decisions, sometimes strategic decisions, with very little guidance. It’s going to be a great opportunity to grow, and we’re looking forward to this.”

The brigade highlighted its efforts to work with organizations in the local community regarding concerns over the increased noise an aviation brigade will bring to the area. Through adherence to local noise abatement policies, leadership said it looks to bring a positive economic impact on the area without any being overly invasive on its residents.

To read this story as it appears on the Defense Video Imagery Distribution System, visit www.dvidshub.net/news/226414.