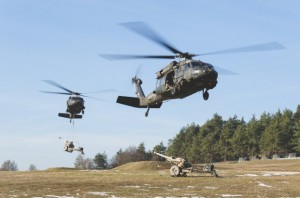 The regionally allocated aviation forces from 3rd Bn., 227th Avn. Regt., or “Task Force Spearhead,” provided the mission command element for the exercise. From their tactical operations center they planned and executed direct attack missions with the AH-64’s, air assault and artillery gun raids with the UH-60’s, and medical evacuations with the HH-60’s.

The Vipers from 1st Bn., 3rd Avn. Regt honed their unified land operation skill set throughout the exercise. It was a clear objective of the battalion to integrate aviation assets with indirect fire, joint attack teams and to use attack aviation as a stand-alone maneuver element.

One such mission involved an AH-64 pilot observing and directing fires for an Air Force A-10 Thunderbolt II pilot. This would normally go through a joint air attack team but the JMRTC staff acted as the approving authority and higher headquarters to make this training scenario possible.

A typical U.S. brigade has a Brigade Aviation Officer to de-conflict airspace and coordinate aviation for massing fires on the objective. However, the Italian Army is not staffed with aviation assets so 3rd Bn., 227th Avn. Regt., sent two lieutenants to the “Garibaldi” Brigade headquarters to be liaison officers.

“We helped the brigade staff mass fires on the objective by keeping the Apache’s on station during artillery fire,” said 1st Lt. JonMichael Renzi, an AH-64 pilot from 1st Bn., 3rd Avn. Regt. “It was a huge learning experience for us and the Italian staff.”

Allied Spirit IV is a multinational exercise between the United States, Canada, Germany, Italy, Latvia, and Slovenia, held at the Joint Multinational Readiness Center, Hohenfels, Germany from Jan. 10 through Feb. 5, 2016.

To read the story as it appears on the Army News Service, visit www.army.mil/article/161503.